500 days after WHO first identified the COVID-19 virus in China, how are people around the world feeling?

Kantar’s COVID-19 Barometer has been exploring people’s feeling and expectations around the world since the start of the pandemic. As we mark 500 days since WHO first became aware of a “pneumonia of unknown cause in Wuhan” and as some countries are releasing restrictions and others still facing devastating times, new data from Wave 9 of the study (April 2021) revisits changing habits and behaviour and looks at current issues and challenges.

The study shows how COVID-19 has affected most people around the world. Forty-two percent have been personally affected by COVID-19; 8% reporting having contracted coronavirus, 23% saying a close family member was affected, and 23% that a close friend had contracted the virus. The impact is most extreme in Brazil, where 87% say they or someone close to them has been infected.

Although the situation has eased in many countries, anxiety and caution remain very high, with 70% agreeing that coronavirus still concerns them ‘hugely’ (vs 79% in April 2020). The advent of the vaccine is transformative. In countries where the vaccination rate is over 30% and the new case rate is low, stable or declining (‘leading’ countries), the level of concern has fallen from 76% to 57%. In countries where the case rate is not declining (‘lagging’ countries), the anxiety level has increased from 75% to 80% today.

We also saw that many people are still worried about falling sick – 33% in ‘leading’ countries and 53% in ‘lagging’ countries. 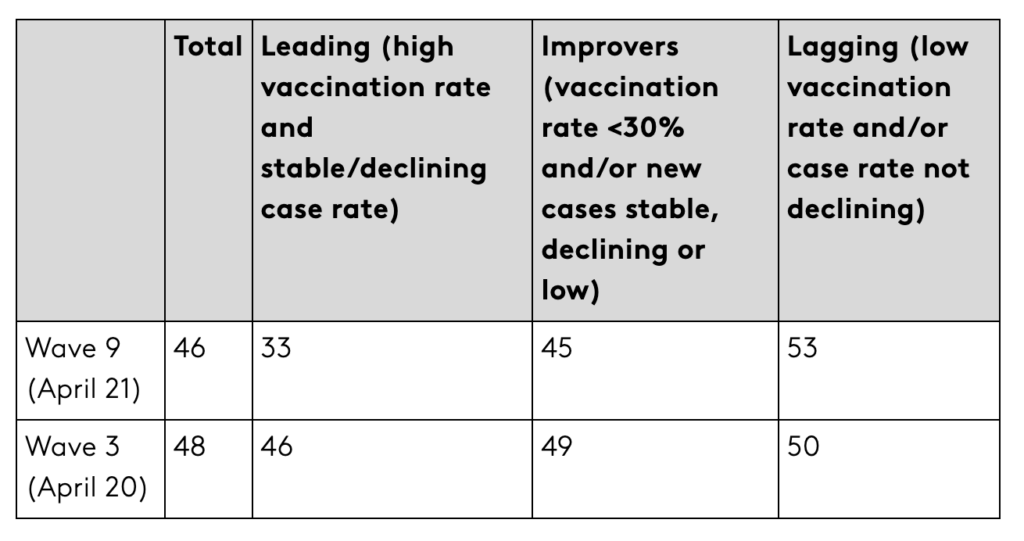 Reassuringly, people mostly remain patient with the rules. A majority (61%) in ‘leading’ countries continues to support following the rules until the end of significant risk, and only 1 in 4 say ‘rules have gone on too long’. Worryingly, in ‘lagging’ countries 55% are content to continue adhering to rules while 35% are not.

The impact on mental health

The study shows that the mental-wellbeing cost of the pandemic continues to build. Almost half of respondents (42%) feel the pandemic has affected their mental health. Progress in vaccine distribution appears to be acting as a release valve, as the reported impact is significantly lower in ‘leading’ countries (35%) compared to ‘lagging’ countries (49%).

Young people are most profoundly affected, with 18-24-year-olds reporting the worst impact, followed by 25-34-year-olds. Those aged 65 or over continue to have the lowest level of impact, although this has increased to 29% from 21% in August.

The situation impacts my mental health (%)

Our research shows that over half of people (54%) have felt an impact on their income. A further 18% still expect it to fall as a result of the pandemic. Again, this has affected young people (18-34) more, with 62% having already experienced a loss of income.

We saw that most people expect a long-term economic impact. One in three (33%) believe the economy will recover quickly once the pandemic is under control; a rise from 30% in April 2020. Only 28% of people in ‘leading’ countries express the same optimism.

The study shows that, globally, 59% of the population are satisfied with the vaccine rollout so far. Satisfaction appears to be partly based on overall satisfaction with pandemic handling. Amongst the countries with a higher vaccination rate, Singapore and the UK have satisfaction levels of 81% and 86%, while the USA is at 67%. Vietnam, Indonesia and Malaysia all enjoy 60% plus approval despite single-digit vaccination rates, reflective of their populations’ general approval levels for handling the pandemic.

During the pandemic, people bought 35% of their groceries online (up from 21%) and we project it will stay at this level through 2021. African and Latin American markets experienced the biggest increases in grocery ecommerce.

Positive online experiences have captured a new committed audience. Half (49%) of respondents had a good online grocery experience, and 38% believe they get a better range online. More than one in three now prefer buying groceries online.

We saw that localism continues to be important. Half (52%) of all respondents pay more attention to product origins than they did pre-pandemic. 68% prefer supermarkets close to home while 64% think local stores are important for the community.

Ecommerce has become more embedded in our lives, now ranking as the number 1 activity people do more than they did pre-pandemic. In May 2020 ecommerce ranked in just fifth position.

Our intentions around “healthy eating habits” have changed: previously ranked as the number 2 priority for maintaining in a post-lockdown life, it has now dropped to fourth position, after online shopping, increased hygiene, and spending time with our household.

Ranking number 3 in May 2020s’s list of intentions, spending time with our families remains in third place in today’s ‘increased activity’ list.

Our promises for “personal development” have waned though. Originally number 4 in May 2020’s list of intended behaviours, it has fallen to number 10 in behaviours we are now doing more.

Not surprisingly, Zoom has become the 5th most used social media app behind YouTube, Facebook, WhatsApp and Instagram, and has been used by approximately two-thirds of survey respondents this year.

Getting back to ‘normal’

We found that people do feel more comfortable returning to their day-to-day activities. But levels of comfort still remain low. Approximately one in three people are now comfortable going back to the office, visiting the hairdresser, sending children to school, doing non-food shopping, going to bars or restaurants, and travelling within their own country. And around one in four is now comfortable going to religious gatherings, the gym and the cinema. However, less than one in five is comfortable with large events, like sports and foreign travel.

Sources of vaccine information remain contentious. Less than half of respondents describe government, health authority or doctors as reliable information sources, suggesting governments need to do more work to instil confidence in their populations.

We also found that a significant level of vaccine hesitancy continues to persist, with 17% of respondents reporting they would probably or definitely not get a vaccine. Hesitancy is highest in the 18-24 age range, where, for most of the world, the opportunity does not yet exist, compared to 8% hesitancy for 65+ age group. Reasons for hesitancy include fear, distrust and misinformation.

From this ninth wave of research, it has become clear that, in countries with a more advanced vaccination programme, a resumption of everyday life is on the horizon. People have less anxiety, feel more secure, and are more open to re-engaging with the world. This is a welcome development, but the long-term outlook is still challenging for a lot of people. The transformation of the retail sector looks set to stick… and people’s intentions for personal transformation during lockdown have tended to fade.

This story was first published by KANTAR.