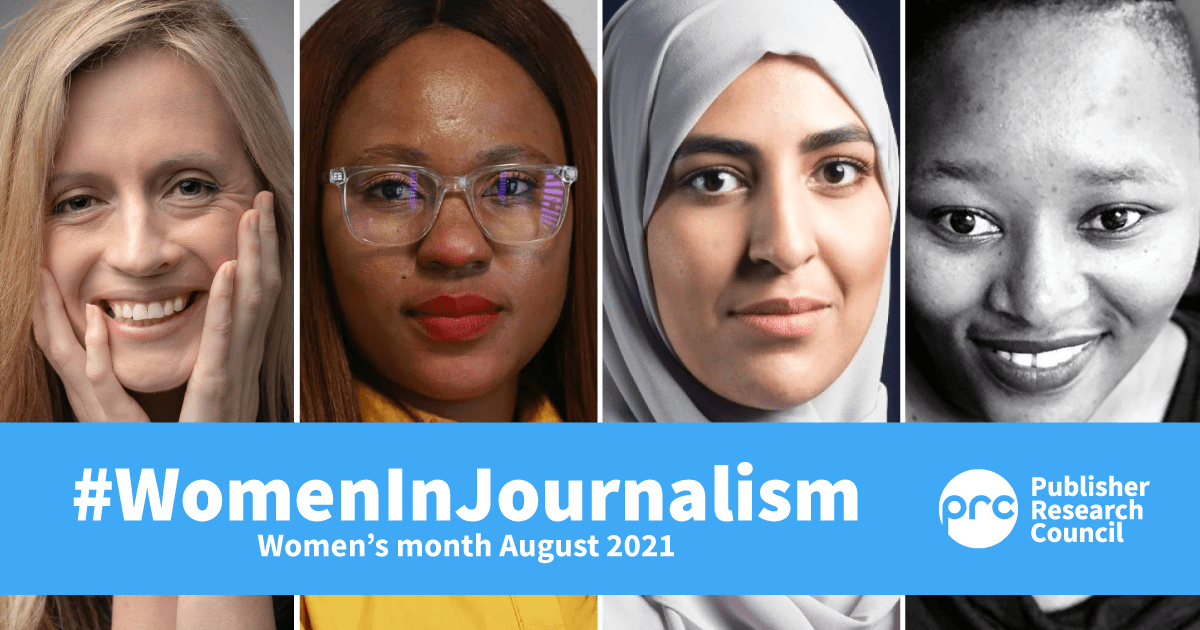 To do our part in honouring this Women’s Month, we are celebrating #WomenInJournalism in August. We’ve asked some of South Africa’s talented female journalists to share their career advice, views on the value of journalism and the importance of a free press with us. This is a summary of what the first four women profiled had to say. 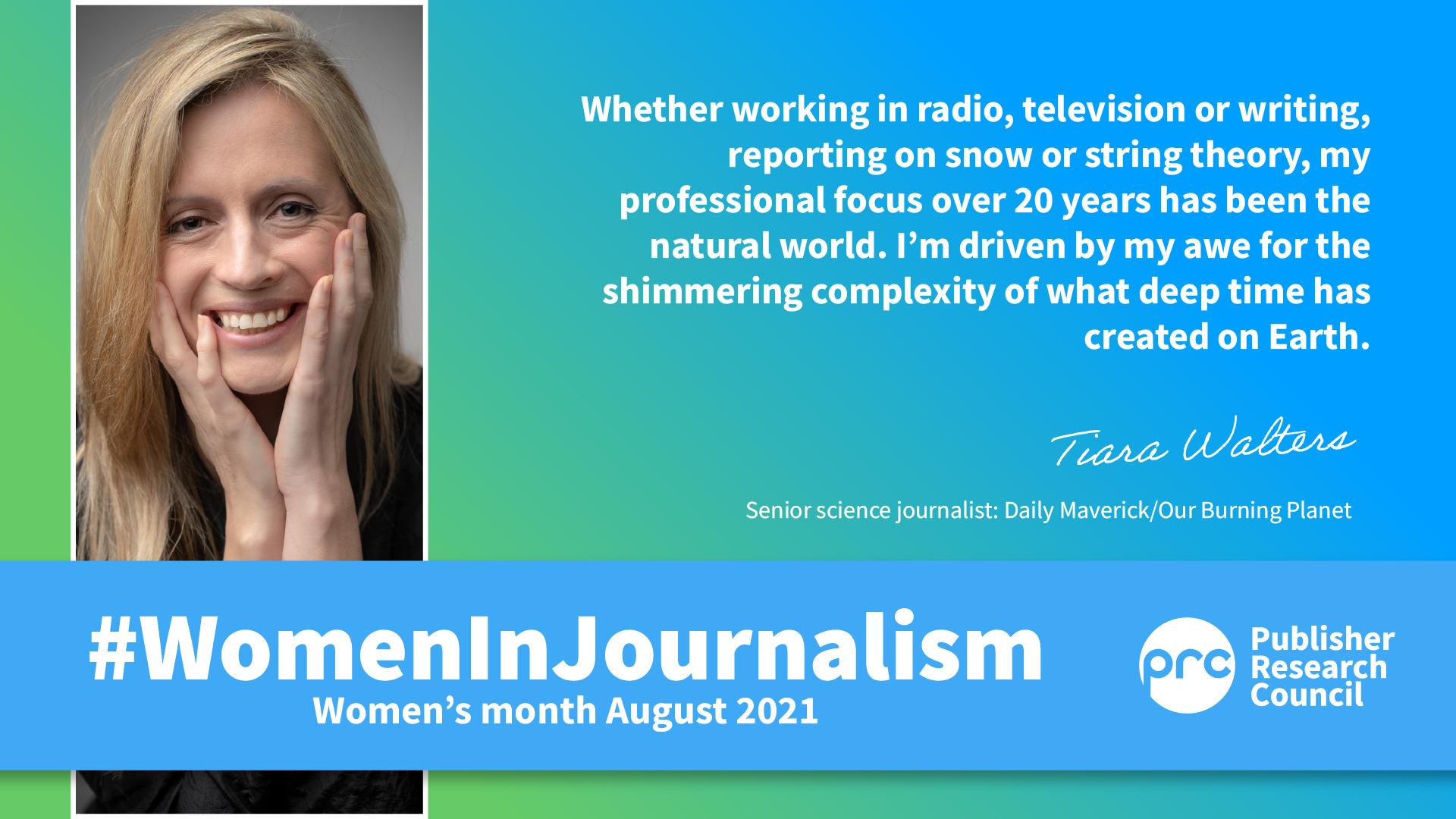 Tiara Walters, Senior Science Journalist at the Daily Maverick/Our Burning Planet explains that “whether working in radio, television or writing, reporting on snow or string theory, my professional focus over 20 years has been the natural world. I’m driven by my awe for the shimmering complexity of what deep time has created on Earth.”

She adds that “There is a new meme going around that the planet will be fine — it’s humans who need saving. While this view is a coping mechanism for many — things will be fine ‘once humans are gone’ — I don’t subscribe to it. Yes, the planet would recover. Eventually. But at what cost? At what level of baseless suffering? And at what irretrievable loss of complexity, both delicately and violently forged over the unimaginable extent of Earth’s lifespan? Life as we know today and the processes that forged it are simply not replaceable, but we still have a chance to put this planet on a path to proper recovery and regeneration.” 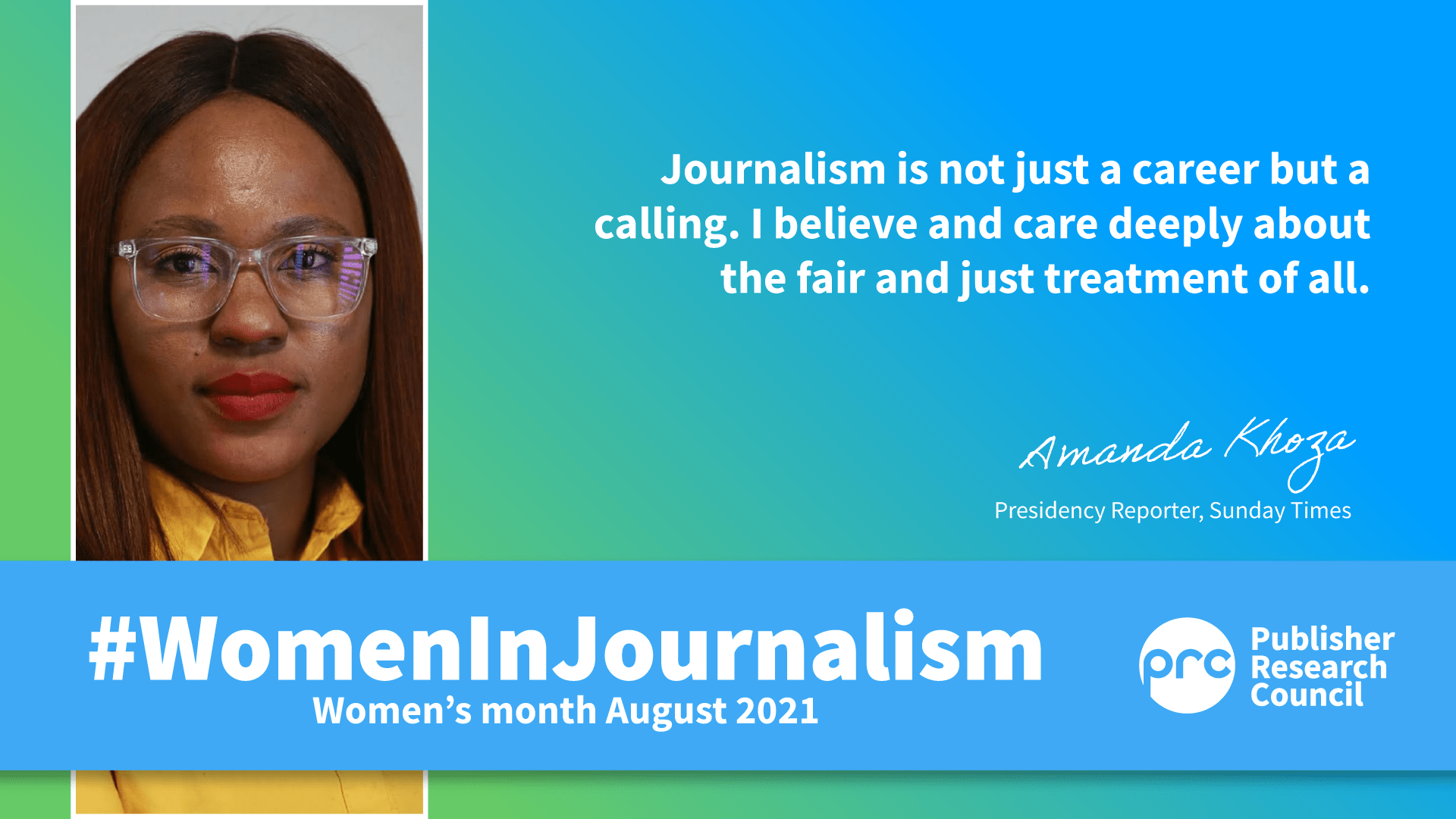 For Amanda Khoza, Presidency Reporter at the Sunday Times “journalism is not just a career but a calling. I believe and care deeply about the fair and just treatment of all.”

A free press is important to her “because people should express themselves freely without the fear of being intimidated by anyone. Journalists should be allowed to report responsibly and accurately on any issues that affect their citizens whether it is politics, health, economics, sports or the arts. At the same time, journalists should be held accountable for reckless, unfair and biased reporting.”

The advice she would give her younger self would be to “keep working hard, you are on the right track, it will pay off one day. Your dreams are valid.” 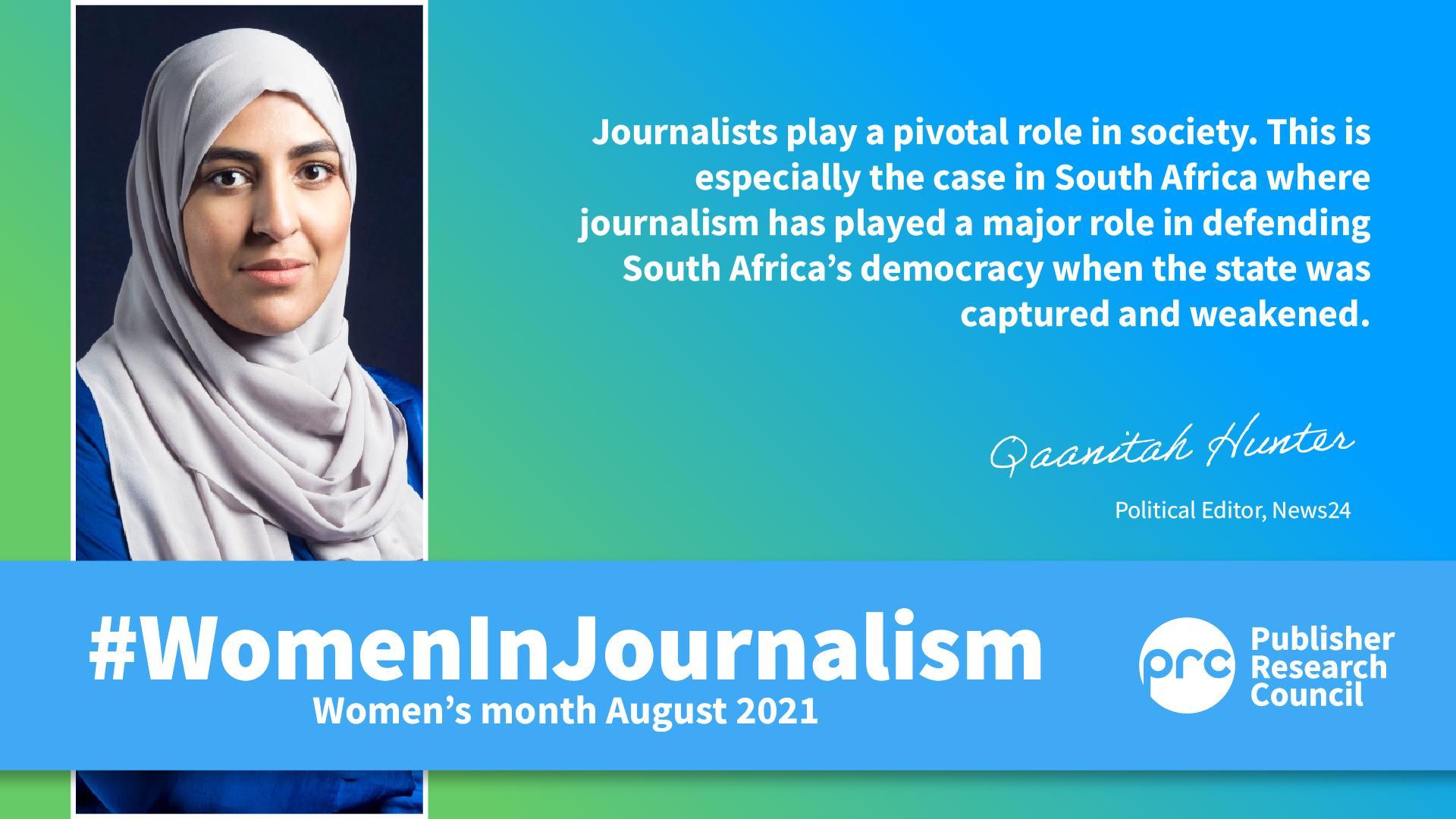 Qaanitah Hunter, Political Editor, at News24 believes that “journalists play a pivotal role in society. This is especially the case in South Africa where journalism has played a major role in defending South Africa’s democracy when the state was captured and weakened.”

Qaanitah confides that she has always loved telling stories and what inspired her to choose a career in journalism is the joy she derives from it. Her advice to her younger self? “You are braver than you think and it will all work out.” 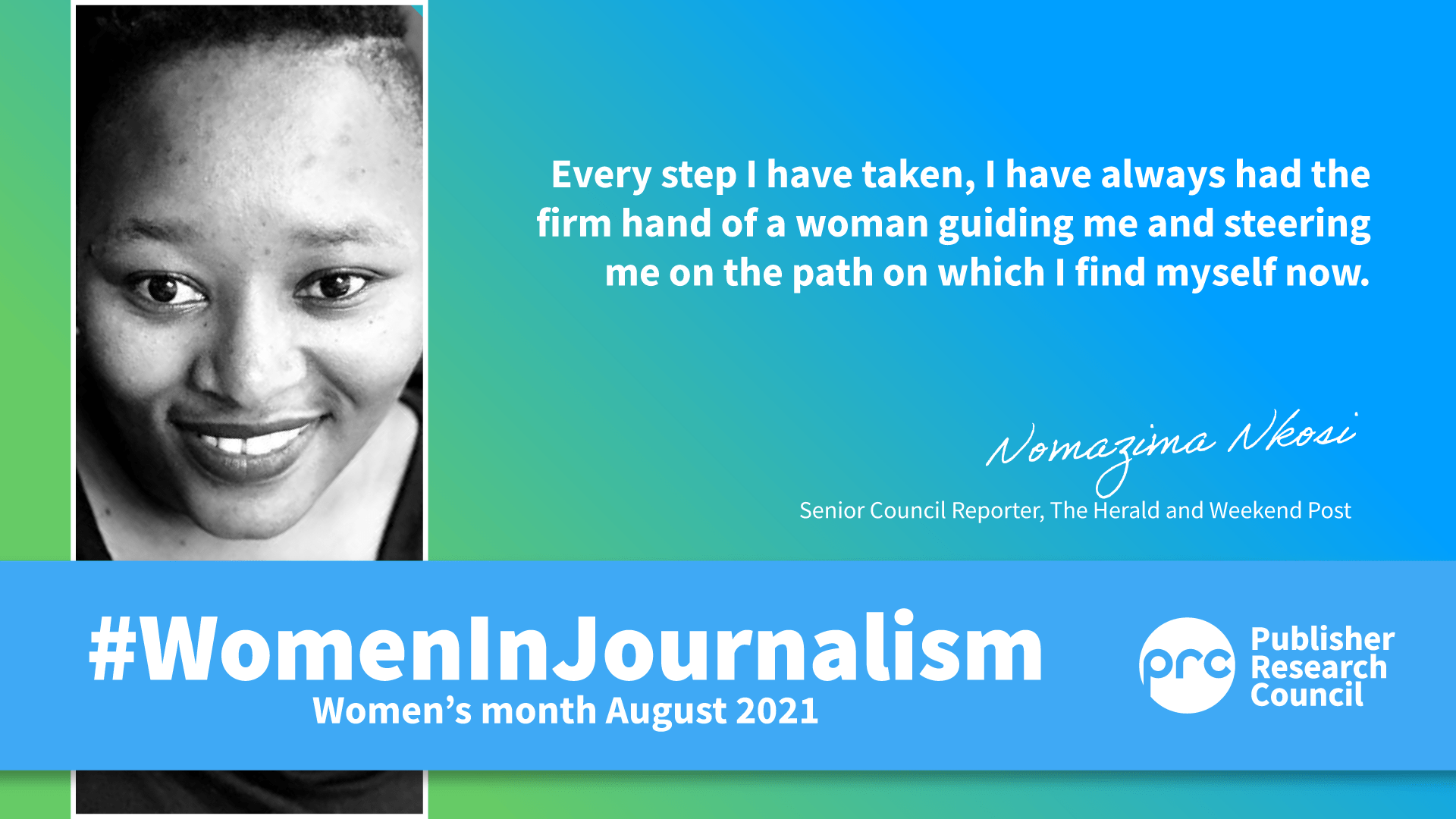 Nomazima Nkosi, Senior Council Reporter for The Herald and Weekend Post values the positive role other woman have played in her life. “Every step I have taken, I have always had the firm hand of a woman guiding me and steering me on the path on which I find myself now.”

She admits that she would have sat her younger self down and had a frank conversation “about how female journalists – especially those of colour – are vilified. Especially now, with the age of social media, it’s a free for all. There will be allegations thrown your way to discredit the good work that you’re doing. You will be called all sorts of things. Do not cower or lower your head based on what people think. What you do matters. You matter.”

We are simply loving this inspirational campaign celebrating #WomenInJournalism and the stellar work female (especially investigative) journalists are doing for our nation.

We’ll continue recognising all that these journalists do as custodians of the truth and for their courage and contribution to a free press throughout August. Follow the PRC social channels and be part of the conversation.