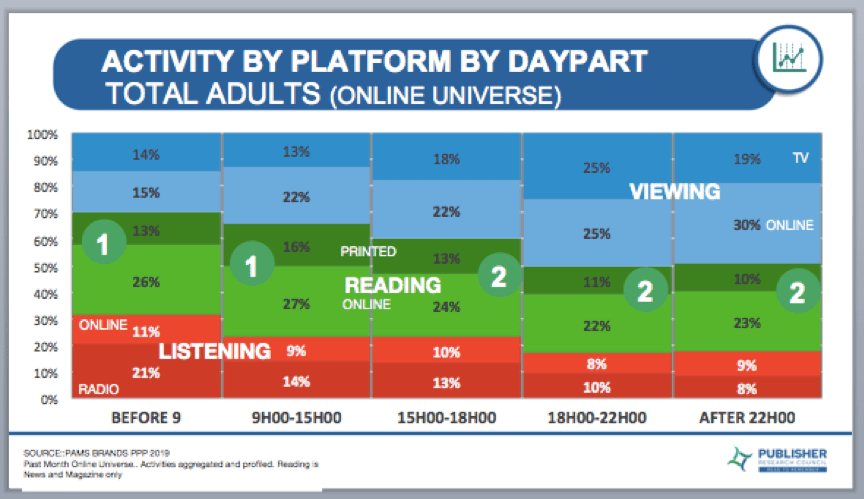 Global Research conducted by Nielsen for the Publisher Research Council (PRC) for its PAMS Brands People Products & Platforms (PPP) Fusion 2019 survey has revealed that during the day, when the shops are open and the vast majority of commerce takes place, a large number of consumers read newspapers or magazines.

Despite the long-held belief that drive-time radio shows take the greatest share of audience, this new survey clearly proves that more people are reading during the day than are listening to audio.

“Radio drive time doesn’t have the same impact as it once had because there are now millions more commuters and office workers, as well as people at home, who are reading on their cell phones and other online platforms during the day,” says Peter Langschmidt, lead consultant to the PRC.

TV is unsurpassed at creating awareness and impact at the lowest cost per thousand, and this is why it takes the lion’s share of adspend in South Africa. Read media are the perfect companion to TV as they allow readers to assimilate far more information, at their own pace, as many times as they need to re-read it, to fully understand all aspects of the product, as well as to compare prices and find the best and closest outlet to buy it.

Smartphones are the primary platforms for reading news and magazine content online, the PPP research revealed, giving a useful guide to advertisers and publishers in terms of planning.

“This is why it is vital that creative must be device optimised and appropriate,” says Josephine Buys, CEO of the PRC. “This is a primary example of an age old issue with creative not working in concert with media planning”

While many consumers are at work during the day, their smartphones are with them constantly. The data shows they tend to dip in and out of publishers’ sites during working hours, before heading home and settling in to watch TV. Even then, reading continues as those watching TV at night are increasingly ‘second screening’, taking in a television show, while checking out what’s going on with social media and breaking news stories.

Although paper circulations might have declined, reading has not. This is good news for publishers and brands alike.